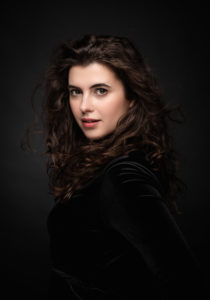 Italian-German soprano Alessia Schumacher enjoyed a highly musical upbringing. In February 2020 she gave her main stage debut as Cercatrice in Puccini’s „Suor Angelica“, conducted by Kirill Petrenko. Further engagements for 2020 include a revival of Haydn’s „Lo speziale“ with Wolfgang Katschner and the Lautten Compagney Berlin, as well as her return to Konzerthaus Berlin to perform „The Gruffalo“ by Iván Fischer.

In 2015, whilst still a student, she sang in her first production with the Berlin Philharmonic (Menotti/The Telephone, 2015), giving her Konzerthaus Berlin debut as Gretel (Humperdinck/Hänsel und Gretel, 2016) soon after. As a winner of the Schloss Rheinsberg Festival competition, she debuted the role of Michaela at the Festival in summer 2017. The following year Alessia sang her first Mimì in concert at Konzerthaus Berlin, returning in 2019 to perform the Narrator in „The Gruffalo“ by Ivàn Fischer. Further operatic roles include Pamina, Echo, First Lady, Romilda, Musetta, Susanna and Livietta.

Equally at home in operatic and concert repertoire, Alessia celebrated her Dartington Festival debut in 2018, jumping in as Eve in Haydn’s Creation directed by Dame Jane Glover. That same year she performed her first Elias/Mendelssohn with the Kammerakademie Potsdam, in a staged version with 400 children. As a Lied recital singer, she enjoys a long lasting relationship with pianists Maria Yulin and Alissa Firsova, with whom she shares a particular interest for late romantic repertoire.

Alessia completed her voice studies at the Hochschule für Musik „Hanns Eisler“ in Berlin, Conservatori Superior del Liceu in Barcelona and the Excellency Program „Barock Vokal“ in Mainz. She previously studied violin at the Conservatorio „G.Verdi“ in Como and holds degrees in History of Art and Musicology from the University of Vienna. Alessia has been awarded a number of scholarships (Bernbeck Exzellenzstipendium, Luzia-Loeser Kulturfond). She is an alumna of the Yehudi Menuhin Foundation „Live Music Now“ and received the Bayreuth scholarship in 2016. She is a prize winner of international competitions including the Concorso lirico internazionale „Piero Boni“ in Brescia (1st prize, 2017).

“The Europe of the Belle Époque”– a musical travel guide