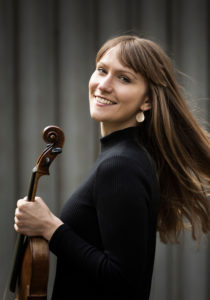 Rosalind Ventris is a leading advocate of the viola. Recent highlights include include performing the Mozart Sinfonia Concertante with Esther Yoo, the Belgian National Orchestra and James Feddeck at the Bozar in Brussels, concerts at the Great Music in Irish Houses Festival, the Auditorium du Louvre, and Het Concertgebouw.

As a chamber musician, Rosalind has performed alongside prestigious artists such as the Arcanto Quartet, Aronowitz Ensemble, Nicola Benedetti, Gerhard Schultz (Alban Berg Quartet), Mitsuko Uchida and Tabea Zimmermann, at festivals including Marlboro, IMS Prussia Cove, West Cork, and Sion. She is a member of flute, viola and harp ensemble Trio Anima, the Kaleidoscope Chamber Collective and Ensemble Perpetuo. With the Kaleidoscope Chamber Collective, Rosalind worked with actors Simon Russell Beale, Ben Miles and Adam Godley at last year’s Cheltenham Festival. She has recorded for Delphian Records and Signum Classics, and broadcast on BBC Radio 3, NPO Radio 4 and RTE. Recent releases Rosalind has played on have been named amongst the best recordings of the year by national newspapers, and ‘Editor’s choice’ in Gramophone Magazine.

Rosalind has frequently collaborated with contemporary composers, for instance, premiering works by Edwin Roxbugrh at the Royal Festival Hall (2011), Purcell Room (2012), and Wigmore Hall (2012), and recording Richard Blackford’s Kalon for string quartet and orchestra with the Czech Philharmonic (2019) (as a former founder member of the Albion Quartet). She has performed alongside Garth Knox and Sally Beamish in performances of their works.

Dowland
Flow my tears, If my complaints could passions move (7′)

Britten
Lachrymae Reflections on a song of Dowland (15′) 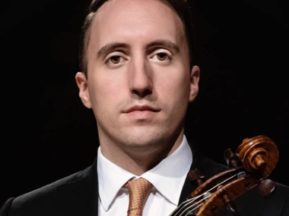